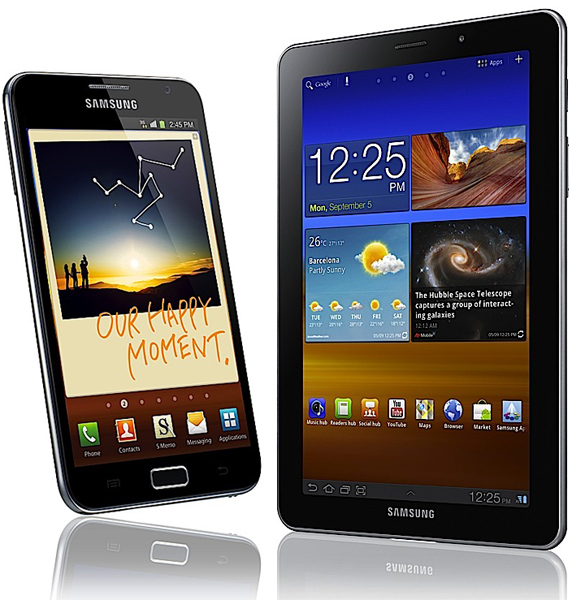 With its Galaxy Note 5-inch tablet-slash-smartphone, Samsung is looking to score where Dell struck out. AT&T will sell the Android device for $300 starting Feb. 19.

AT&T will begin selling the Samsung Galaxy Note on Feb. 19 for $300 with a two-year contract. Impatient folks, or anyone wanting assurance they’ll get their hands on one—and be able to choose between Carbon Blue and Ceramic White—will be able to pre-order Feb. 5, with delivery by Feb. 17.

Introduced at the Consumer Electronics Show (CES) in January, the Android-running Galaxy Note straddles the fence between smartphone and tablet, featuring a 5.3-inch HD Super AMOLED display, a stylus called the S Pen, and basically all the features consumers expect from both devices. Plus a little more.

The S Memo application—a complement to the S Pen—enables a user to “capture” pictures, voice recordings, typed text, handwritten notes, drawings, or really any kind of user-created content and combine them in a single application and convert it all into a memo that can be shared.

Users can not only draw and take notes with the S Pen but do things like handwriting an email.

“Phone? Tablet? It’s Galaxy Note!” Samsung enthuses on its site. Perhaps Samsung’s gangbuster’s success as the number-one smartphone maker in 2011 has led it to believe it can do no wrong. Such fence-straddling business was a downfall of the Dell Streak, an early tablet with a 5-inch display that analysts complained had terrible “pocketability,” making it a somewhat inconvenient smartphone, but a screen too small to offer quite the full appeal of a tablet.

Or, perhaps, with tens upon tens of millions of tablets in circulation, and consumers now exceedingly comfortable with the form factor, the time has come for the 5-inch model.

“I think people are going to give 5.3 inches another look, now that their minds have been opened to the idea of tablets,” Roger Kay, principal analyst with Endpoint Technologies, told eWEEK. “This size offers a different sort of compromise. It’s closer to the phone. It will fit in many pockets, one of the best measures of phone-type portability, but it’s got a bigger screen than most phones. Maybe this is the right moment for something like the Galaxy Note.”

The Galaxy Note runs the Gingerbread version of Android, features a 1.4GHz dual-core processor, comes with 16GB of internal memory, and will be able to hop on AT&T’s HSPA+, LTE and WiFi networks.

There’s something called an S Planner, a sort of smarter take on calendar-meets-scheduling, according to Samsung, plus an 8-megapixel camera with a slew of features, like blink detection, white balancing, and GPS tagging, and a front-facing camera for video calls.

AT&T will also be happy to sell you a Desktop Dock for the device, a spare battery charging system, a Flip Cover case in tan, black, pink, red, white, or blue, and a Holder Kit for the S Pen, among other accessories.

Lastly, Samsung officials said the device includes a 2500 mAh battery, though offers few details about battery life. Some testing by GSM Arena, however, found it offering nearly 13 hours of 3G talk time, 3 hours and 35 minutes of Web browsing, and 8 hours and 25 minutes of video playback. Not shabby.