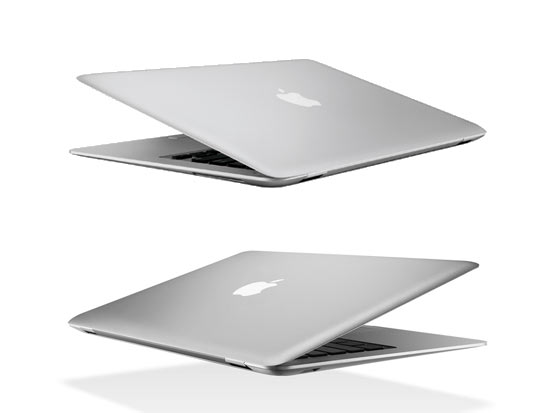 While announcing the launch of the new MacBook line-up, Apple CEO Tim Cook said: “Everyone is trying to copy it,” referring to MacBook Air, the company’s thinnest laptop. He added: “They find it is not easy.” While there are a large number of buyers out there who wouldn’t think twice about paying up to a lakh of rupees for the top-end Apple MacBook Pro, one of the sleekest laptops in the market. But there are buyers who cannot bring themselves to pay anything more than Rs 40,000 for a laptop mostly because there are so many affordable options from several brands that do the job. Here is our take on the top ultrabook models and Apple MacBooks that should help you make the right choice.

The refreshed MacBook Air models have been topped with Intel’s 3rd Generation Core i5 and i7 dual-core processors and are available in 11-inch and 13-inch designs. Apple has also updated the flash storage, which the company claims is twice as fast as the previous generation, upgraded the memory, and added USB 3.0 connectivity. As far as connectivity options are concerned, the 13-inch MacBook Air features two USB 3.0 ports, and single Mini DisplayPort and Thunderbolt ports, but lacks ethernet and HDMI connections that are offered by most Ultrabooks. It is however at par with competitors with standard wireless connectivity options, including 802.11n/g/b/a and Bluetooth 4.0.

For the new MacBook Pro with Retina Display, Apple has made sure that the screen-whopping 2880×1800 pixels resolution — leaves every other laptop or Ultrabook behind. The next-gen MacBook Pro delivers just that with a quad-core Core i7 processor, Nvidia Kepler graphics, and super-fast flash memory. The inclusion of dual speakers integrated into the new MacBook Pro deserves a mention, as it has made the sound output a lot better.

Considered to be a new category, Ultrabooks entered the market just last year. A typical Ultrabook has a low-voltage processor (yet it is hard for users to notice a loss of performance), and thereby smaller power consumption that helps in stretching the battery life. Ultrabooks also come with solid-state drives instead of hard drives and that’s why you can instantly start from hibernation. With Microsoft’s upcoming next-generation operating system Windows 8, Ultrabooks (to be launched later this year) will sport touchscreens and the new user interface.

Advances in computer hardware and components limit the peak performance capabilities of the current Ultrabooks. Some people might be turned away by the fact there are higher performing laptops on the market that in some cases, are priced less than the Ultrabook. But the most important reason to choose an Ultrabook, even though they are in a premium category, today will be the overall convenience that ties hand in hand with owning a fully-functional computer that is lightweight and easy to store.