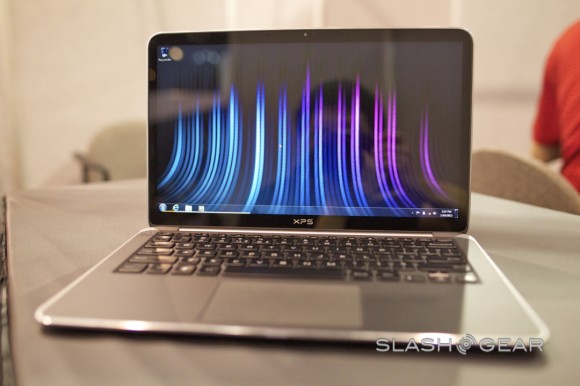 As 2012 rolls on, consumers shopping for a PC will be seeing more of the thin, light, quick-starting Windows laptops called ultrabooks.

Many PC makers have come out with ultra-light laptops, like Apple’s Macbook Air and others. Now Dell is joining the field with its first ultrabook, the XPS 13, which starts at $999. Personal Technology columnist Walt Mossberg finds there’s a lot to like, but poor battery life may be a deal-breaker for some.

Big names like Lenovo and Toshiba already have entered this new category, and on Tuesday, Dell will introduce its first ultrabook, the XPS 13, starting at $999.

Dell has had difficulty lately attracting consumers. At one time, it was the go-to brand for many people looking to buy a computer. But, in recent years, its consumer business has faltered as individuals, especially in the U.S., have flocked to Apple, Hewlett-Packard, and even once obscure brands such as Acer and Asus.

Now, the Texas tech titan is making a renewed push for the affections of consumers and the XPS 13 is an important weapon in that push. Like other ultrabooks, it’s an attempt to emulate Apple’s popular MacBook Air by offering a thin, light laptop with good power that has a full-size screen and keyboard, starts up and resumes quickly, uses a solid-state drive, and claims decent battery life.

However, Dell’s entry offers an interesting twist: It packs a 13-inch screen into a footprint that is closer to that of models with just an 11- or 12-inch display. This makes it easier to fit in a briefcase or on an airplane tray table in the coach. When placed atop a MacBook Air with the same-size screen, the Dell is noticeably smaller.

Dell uses edge-to-edge glass for its screen and leaves much less of a bezel, or border, around the screen, than Apple does. The XPS 13 isn’t smaller than its competitors in every dimension. It’s thicker and a tad heavier than the comparable MacBook Air. And, like the Apple, it’s significantly heavier than Toshiba’s ultrabook. But the shorter width and height are a nice touch.

I’ve been testing the Dell XPS 13, and there is a lot to like about it, even beyond its compact dimensions. I found it to be solid and well built, speedy, and with a good, backlit keyboard, a bright screen, and good looks. It emerged from standby mode quickly and reliably. But this machine has a major downside: subpar battery life. In my standard test, it fell about an hour short of the longest-lived competing ultrabook I’ve tested and two hours short of the 13-inch MacBook Air.

Like other ultrabooks, the XPS 13 isn’t a bargain computer. It’s costlier than the typical, bulkier Windows laptop, which can be had for $400 to $700. But, at $999 with 4 gigabytes of memory and a 128-gigabyte solid-state drive, the Dell is $300 less than the 13-inch MacBook Air with the same specs. Both machines use Intel’s midrange i5 processor. Dell offers an otherwise identical model with double the solid-state storage for $1,299, and a model with double the base storage and a more powerful processor for $1,499.

Dell’s new ultrabook is compact, well-built, and speedy, sporting a good backlit keyboard and a bright screen. But it has subpar battery life. Photo: Getty Images.

The model Dell sent me for testing was high end. But based on my tests of other ultrabooks—all designed to tight standards promulgated by Intel—I have no reason to doubt the base model with the midrange processor also is speedy, and no reason to recommend the costlier chip.

The XPS 13, which runs Windows 7 and is part of Dell’s premium consumer line, has a silvery aluminum top and a base made of carbon fiber. It rests on two long rubber runners. The battery is sealed and ports are minimal. There are two USB ports—one is the faster USB 3.0 type—and a video-out port called a Mini Display Port.

The spacious keyboard has nicely separated keys. The touchpad is large, with no physical buttons. But I found it required tweaking in its buried settings screen before it felt right for me.

I was annoyed that, out of the box, the top row of function keys that is commonly used to adjust things like brightness and volume also requires you to hold down a special key to get to these controls. But this can be changed in a settings panel and Dell says it’s considering changing the way this works.

The 13-inch screen fits nicely in a smaller footprint than the Mac’s but has a lower resolution than the Apple screen of the same size. So, an identical Web page in the identical browser displays more on the MacBook Air than on the Dell XPS 13.

Dell says this is because it had to use the lower-resolution panel for a special manufacturing process is employed on the new ultrabook. It says it will increase the resolution later this year.

Dell’s ultrabook comes with a standard suite of Microsoft and Dell software, including the Windows Live Essentials consumer package, which includes email, and a photo and video program. A starter edition of Microsoft Office contains somewhat stripped-down versions of Word and Excel.

The computer easily handled other programs I installed, including the Google Chrome browser, and Apple’s iTunes.

But Dell still clings to the bad old habit of loading in the software you may not want, for which it presumably gets paid. In particular, it has added a Dell-branded Bing toolbar to the Internet Explorer browser.

As noted above, battery life was disappointing. In my test, where I use full brightness, disable power-saving software, leave on the Wi-Fi, and play a loop of music, the battery on the XPS 13 lasted just under four hours, the worst I’ve seen on an ultrabook.

By contrast, in the same test, the longest-lived ultrabook I’ve tested, the Lenovo IdeaPad U300s, got nearly five hours, and the MacBook Air for almost six hours. I estimate you could likely get five hours on the Dell in a more normal usage pattern.

Ultrabook shoppers looking for a well-built, unusually compact 13-inch model should consider the Dell, but the relatively poor battery life might be a deal-breaker for some.