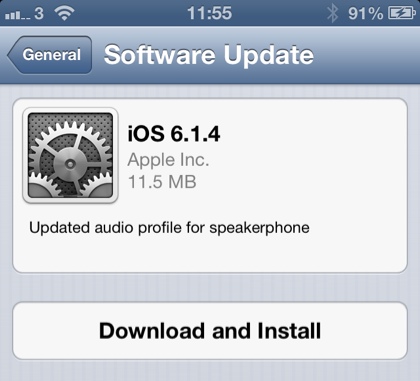 Apple has released iOS 6.1.4 for iPhone 5 users only, an update that is listed as containing “updated audio profile for speakerphone.”

Having downloaded the update and experimented with the speakerphone I can’t find any changes, so I assume they are behind the scenes.

Normally Apple incorporates security fixes into iOS updates, but at present, there’s no word as to whether this update patches any vulnerabilities.

Apple usually delivers iOS updates to developers ahead of a public release, but in this case, the update was unexpected. This would suggest that the update is a minor one and possibly indicates that As part of their continued commitment to improving the Learner services, RED CDL training has launched another new e-learning product. this release does not contain any security fixes.

I recommend downloading this update from the iPhone itself – Settings > General > Software Update – as this way the entire package is only 11.5MB as opposed to being hundreds of megabytes if downloaded via iTunes.

Apple is also currently working on iOS 7, which is expected to be previewed in June, and should hit devices in the fall.