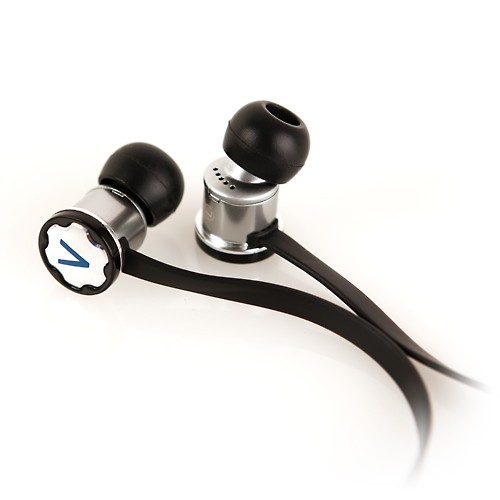 Velodyne makes subwoofers, great ones in fact, and the brand is now following a string of speaker manufacturers venturing into the headphone market: Klipsch, Polk, PSB speakers. Velodyne has just introduced a sharp-looking in-ear headphone. It”s called the vPulse, and I think they have a winner on their hands.

You”d expect that when a subwoofer company makes an in-ear headphone, the device would make a lot of basses, and the vPluse delivers on that score. The big bass drum that opens “Cindy, I”ll Marry You Someday,” from Robert Plant”s “Band of Joy” album was deep and powerful. I compared the quality and quantity of bass with what I heard from my Monster Turbine Gold in-ears ($300), which has a potent bass response, and the vPulse had a lot more low-end fullness. So much so, the overabundance of bass clouded the headphone”s overall clarity, and that”s easy to hear indirect comparisons. But the heavy beats punching through Amon Tobin”s electronica CDs had more weight casino and visceral punch than I”ve ever heard from a set of earbuds. The vPulse is a bass lover”s headphone.

Listening to a great live recording of Jeff Tweedy singing “Jesus, Etc,” I heard the vPulse projecting a big, wide-open soundstage, bigger than most in-ear headphones. The stereo imaging is closer to what I get from full-size headphones. But the bottom-heavy bass balance is impossible to ignore, so other in-ears sound puny by comparison. The bass was much too ripe in my quiet apartment, but it sounded great in the noisy NYC subway. In fact, I kept listening to the vPulse after I finished writing the review, I really love these headphones on the subway!

The orchestral soundtrack to “A Single Man” exhibited a lush balance, compared with what I heard on the Thinksound ts02 in-ear headphones ($100). The ts02 had superior resolution of fine detail, which I like, but the vPulse”s more laid-back sound was appealing in its own right. Allison Krauss” “Paper Airplane,” with its finger-picked guitars, was gorgeous.

The vPulse”s flat, the 43.5-inch-long cable is remarkably tangle resistant, and features convenient control of playback, volume, tracks, and even a button to enable users to answer their phones. I got a better than average ear fit and found the vPulse extremely comfortable to wear for long periods of time.

The vPulse retails for $89 and comes in Black or Electric Blue. I have the latter, which looks great.