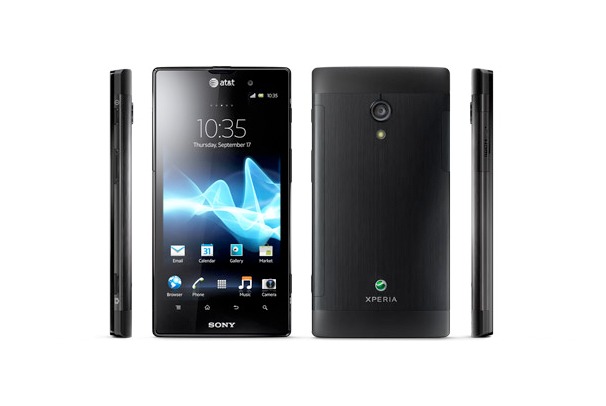 Sony is coming back into the competitive smartphone world the right way. The Sony Xperia Ion is a big move for Sony. This is the first phone without the Ericsson name (which I think was a great move for Sony). They seem to have gotten it together with their first 4G LTE phone. Announced at the beginning of the year, anticipation built for the long-awaited release. I was excited to see what the Xperia Ion had to offer. It is from Sony after all. After a couple of weeks with the phone, I’ve learned to love it. While there are a few setbacks; they are not enough to stop you from getting the phone.

The Xperia Ion has an HD (720 x 1280) Reality Display on a 4.6″ screen. The front has a 1.3-megapixel camera at the right of the AT&T logo. The bottom has four capacitive touch buttons (menu, home, back, and search). The top border has a 3.5 mm headset jack in the center. The right side has the power/standby button on the top, a volume rocker, and a dedicated camera button on the bottom of the strip. The left border has the micro-USB charging and micro HDMI out port. When you take off the top cover, there’s a microSD card slot and the sim card slot. The rounded back of the Ion houses a 12-megapixel camera with an LED flash. It covers the non-removable 1900 mAh battery. Those who like swapping batteries throughout the day may not love this idea. Like I’ve stated in previous reviews, I love phones with big screens. The size of the Xperia Ion was definitely not a problem for me.

This screen is just outright beautiful. It’s clear HD (not AMOLED). I can see the phone clearly in the summer sun. The colors are just fun and vibrant without being saturated. A lot has to be said about Sony Mobile Bravia Engine technology. The screen is a beauty to look at. It has “scratch-resistant, shatter-proof resistant mineral glass”. I guess this means no Gorilla Glass. I’d get a screen protector.

The body of the Xperia Ion is sleek. It has a very sophisticated “adult” look. It has a good feel at 5 ounces.

The phone comes with Android 2.3. A lot of users may not be happy with that, but there is an update around the corner (Sony has both announced it and started to push out updates). I like Sony’s skin. It’s not overbearing; leaving that stock Android feel. I’m sure they understand that consumers are not too big on overbearing user interfaces (ie Samsung’s TouchWiz and HTC’s Sense). With the 1.5 dual-core Qualcomm Snapdragon S3 processor and 1 GB of RAM; executing tasks on the Ion was easy. There was a very smooth feel. No lagging whatsoever! Being on an LTE network is of course helpful. Downloading apps was a breeze, and there were no dropped calls.

This phone actually got a lot of attention when I used it outdoors. People were shocked to see Sony come such a long way. For a phone with Android Gingerbread, the features were pretty advanced. You can create app folders with ease; an added benefit of the Xperia Ion is access to Sony’s Entertainment Network. It’s basically their store for movies and music. You can stream movies and music (different prices to rent and keep the entertainment). Unlimited streaming and downloading for $9.99/ month with the music app is a big plus. Sony has quite a catalog to choose from. With 16 GB of internal storage, you have a lot of room for media. And if that’s not enough you can add up a microSD card of up to 32 GB. I enjoyed watching music videos on this phone. It doesn’t hurt my eyes. Sharing content between my PlayStation 3 and the Ion wasn’t too troubling. It could’ve gone smoother. But I’ve yet to have a seamless DLNA experience. But if you have a Sony Bravia TV (I don’t); the phone will open a “TV Launcher” making sharing and streaming a bit easier.

The camera was my favorite feature of this phone. I think the camera is a good reason (alone) to get the phone. I am a social photographer. I like taking pictures of random things/people/places and sending them to friends and/or uploading them. I don’t always tote a camera with me; so I rely on my smartphone extensively. There’s nothing worse than missing the chance to snap a shot of something interesting. The panoramic mode works really well on this phone. I haven’t been able to master it on other devices. This phone snaps pictures quickly; I mean quickly. As soon as you launch the camera, the phone snaps a picture. Talk about reassurance! Rarely would the autofocus fail me? I was more than satisfied with most of my spur of the moment shots. The colors were vibrant and my low light pictures were reasonable. I am not an expert photographer so detailed specifications as for washed-out colors and yellowed whites will not be mentioned in this review. If you need to meet a high standard; use a real camera.

While some claim this phone to be behind in technology. It has NFC capabilities I now can’t live without smart tags. You can purchase Xperia Smart Tags and trigger your phone to do certain things just by scanning the tags. I did simple things that make life easier. For example, when I get into the car, it opens up either the maps app or the music app. Very helpful when on the road. Changing profiles is also easy with Xperia Smart Tags. The options are endless.

I think for the amount of money you’re paying for this phone. It’s definitely worth it. That’s if you don’t mind doing an Over-the-air update to get Android Ice Cream Sandwich. The phone is sleek and sexy. The vibrant display won’t hurt your eyes and definitely won’t discourage you from using the phone. The easy networking with the PlayStation and Bravia TVs (which I know quite a few people who have them) is an added benefit. I think Sony has definitely learned from their past mistakes. They gave a powerhouse of a smartphone at a great price.

What is a CMS?