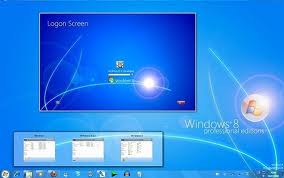 The new Metro UI will make Windows 8 a totally different experience for XP, Vista, and 7 users, but it will especially challenge those of us who use a desktop PC. Why? Because we are accustomed to mouse input and Windows 8 emphasizes touch. Metro is much better suited to touch than the mouse.

So how can desktop users today, prepare themselves for when they later upgrade to Windows 8? I’ll tell you.

If You Are Running Windows 7, Likely Your Computer Will Run Windows 8

From everything we have heard so far, it appears that if your computer currently has Windows 7, then it should be able to run Windows 8 without a problem. Having worked with the Windows 8 Preview Build a bit, this much I can tell you: One key component of your system will be critical and that is your hard drive.

When I installed Windows 8 on one of my desktops that were running Windows Vista, I didn’t want to disturb my current operating system, so I decided to simply disconnect my hard-drive (a SATA drive) and installed another drive into a removable drive bay for Windows 8. I only had a spare IDE drive so I used it, which would be slower than the original SATA drive on my computer. The rest of the system was fine since I had recently upgraded the CPU to a decent Pentium D dual-core and the RAM to 2 gigs (most Windows 7 PC’s should have plenty of memory and a decent CPU for Windows 8).

My setup for Windows 8 was actually quite interesting. Because the hard drive was in a removable bay, I could easily hear when it was running. I didn’t have to look at an LED to see if it was being accessed, I could hear it. Second, because I only had an older and slower IDE drive it was more apparent when the drive was being accessed. The drive had to work a little harder than a newer SATA drive would, and this showed.

Windows 8 appears to really work the hard drive. Even when the computer was doing nothing (no apps running) and the Metro screen (menu) was visible the hard-drive runs a great deal, more than I would have expected. While I can’t say for sure, it is my impression, so if your computer is older (before Windows 7) and you upgraded to Windows 7, you may want to consider making sure you have a more current and fast hard drive installed before upgrading to Windows 8. If your computer came with Windows 7, likely the hard-drive should be sufficient. The fact that your computer is running Windows 7 (even if you upgraded to it), likely it should have enough memory, a decent CPU, and Graphics card/GPU which should be sufficient for Windows 8.

What Your Desktop Is Likely Missing — Touch!

What else do you need to prepare for later upgrading to Windows 8? This much I can tell you. Touch will be vital to get the full benefit and experience from Windows 8, and you can get a head start on this right now. How?

The prices for multi-touch enabled monitors are getting low enough that you may be able to afford to get one now — and they work great with Windows 7. As a programmer, I can tell you that Windows 7 already supports the key elements of touch that Windows 8 does. The difference is that most software is not currently designed for touch, while the Windows 7 operating system actually is. Most future Windows 8 software likely will be touch-ready.

Even though much of the software you are currently using isn’t touch-enabled, it is actually beneficial to start getting used to touching now. Why? Because likely with Windows 8 you may still use legacy software with it, so you will be more prepared for the experience later. Additionally, there is actually some software already available now for Windows 7 that is touch-enabled, so you can start getting a real feel for working with touch today.

Once you install a touch-enabled monitor with Windows 7, I recommend going to Microsoft’s website and downloading the free Touch Pack for Windows 7. This free touch-enabled kit contains six touch-ready applications. The two most interesting and useful of these are Microsoft Surface Globe and Microsoft Surface Collage. My wife really enjoys working with Collage programming using touch.

What It’s Like To Have A Touch-Enabled Monitor With Windows 7.

I recently purchased a very nice 22-inch multitouch monitor for my wife’s Windows 7 PC — she loves it, and so do I. Even with Windows 7, it is enjoyable and useful. I actually found a great deal for a Planar PX2230MW multitouch at Newegg.com for only $249 and free shipping (retails for $399). Newegg doesn’t have the monitor anymore for that price, but I just checked Tigerdirect.com and they sell it for $269.

When it comes to a desktop, size really matters for a touch-enabled monitor, especially when working with software that was not designed for touch. The complaints you may hear about using such software on the current generation of Windows tablet PCs (difficult to be accurate when touching small UI elements on the screen) is not as big a problem when you have a good size touch monitor. I wouldn’t go less than the 22-inch size I chose, for a desktop computer.

The point: Now is the time to start looking for deals on multitouch-enabled monitors for your Windows 7 desktop. When you later upgrade to Windows 8 likely the experience will be much more enjoyable and productive. Remember, the public beta is expected in February.