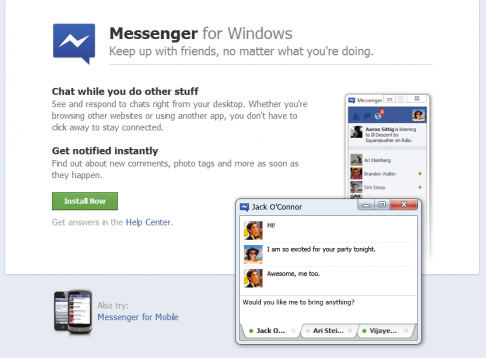 Facebook officially introduced Facebook Messenger for Windows. “You should be able to stay in touch anytime, no matter what you’re doing,” a Facebook spokesperson said in a statement. “So today we’re introducing Messenger, a new app that brings Facebook to your desktop.” The word “Messenger” is a link to facebook.com/about/messenger where you can download the desktop client.

If you’re getting a huge feeling of déjà vu, you’re not alone: Facebook Messenger for Windows was officially released in December 2011. The client leaked out early and Facebook responded by telling journalists like myself about the Facebook Help Center page detailing the new application, and by releasing an official download link. Here’s what I wrote at the time:

Facebook would not confirm the version number with me (update: I figured out its version 2.0.4373.0), but given that the application updates automatically, I think Menlo Park made a decision to officially release it instead of trying to combat the leak. Smart move.

So, what does this application require to keep you updated? First and foremost, you must be logged in to Facebook. After you click on the blue “Log In” button pictured above, you will be redirected to the facebook.com/desktop/login webpage where Facebook explains that Messenger for Windows requires you stay logged in so that it can deliver chat and notification messages to your desktop. This means you will stay logged into Facebook even after you close your browser. To log out of Facebook, you’ll need to actually do so from Facebook Messenger for Windows.

In addition to being a standalone application, Facebook Messenger for Windows can be snapped to the side of the screen; that’s probably why it only works for Windows 7. Facebook has hinted at a few upcoming features for the Windows flavor already: chatting with multiple friends, video calling, limiting chat availability, and editing settings.

Facebook believes users want to use the social network’s real-time features without having to keep a browser window open. The social networking giant is clearly hoping that users will leave Messenger for Windows on throughout the day, probably since most Facebook addicts already do so with a browser tab. In addition to Windows 7, Facebook Messenger is also already available for Android, iPhone, and BlackBerry.

It’s not clear if Facebook plans to offer support for anything before Windows 7, but I would wager the company will simply move on towards Windows 8. A Linux client is even less likely, but you never know.