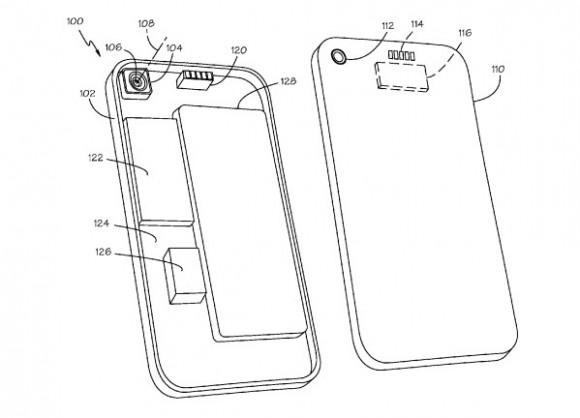 With the unveiling of iOS 6 during the WWDC, speculations regarding the next-generation iPhone have taken new heights.

Designers are bringing out concept designs of the phone and the latest one being an advertisement uploaded on YouTube by a 17-year-old Dakota Adney. The ad featured a transparent Retina Display which projected a laser keyboard. Apple, however, has not provided any information but the iPhone 5 is expected to come with a larger screen display and support 4G LTE with liquid metal casing.

In another turn, Apple has been awarded a patent for a removable panel that allows camera configuration by U.S. Patent & Trademark Office.  The design is expected to be included in the iPhone, iPod Touch, or maybe a different device altogether. According to the designs, the device seems to be for the back panel which be swapped for optic modifications of the camera and looks like an iPhone structure.

“The patent drawings depict an iPhone-like structure. New optical options would allow users to reconfigure or even replace the lens depending on the photo opportunity, a process more closely resembling high-end digital cameras with features like supplementary lenses and filters, optical zoom, and optical image stabilization,” writes PCMag.com

Looks like Apple is trying to tap its users and photographers who desire to have a removable lens attached to its iPhone. Will this mean the company is also tapping on DSLR users? Or are they coming out with their own separate portable device?

Apple is known for applying innovative technologies to its devices.  Introducing a swappable lens for its next-generation smartphone could be one of the new concepts for the iPhone 5.

Another likely scenario could make the iPhone 5 highly secure if integrated with Apple’s iOS 6.  Security is one of the most important features that a user looks for and Apple’s new mobile operating system iOS 6 is all set to deliver it. The new iOS 6 would require a user’s permission in order to access any private data stored in the device.

According to Apple’s security section, the new system would protect the Calendars, Reminders, Contacts, and Photos and when an app requires and access to those data, it would prompt the user and process accordingly. The user can set the switch access on and off in Settings in the Privacy option. APIs are also available for developers to set a “purpose” string that is displayed in order to help users understand why their data is being requested. Changes to the EventKit and Address Book frameworks are included to help developers with this feature.

Apple taking up concerns on its privacy setting came up after reports were circulated when Path, an iOS, and Android application demanded user contact information without permission. To which the company had reacted that apps collecting or revealing user’s contact data without prior permission are against their guidelines.

The iOS 6 also brings new features like its own new map app with 3-D Views and turn-by-turn spoke directions doing away with Google maps along with Siri Technology with more languages for the new iPad.

Rumors speculate that Apple may be making its new iOS 6 available to the public this fall.  Along with the iOS 6 debut, the iPhone 5 may also be joining the party as it is suggested that Apple’s next-gen smartphone will be integrated with iOS 6.

How to Create a WordPress Widget in a Plugin