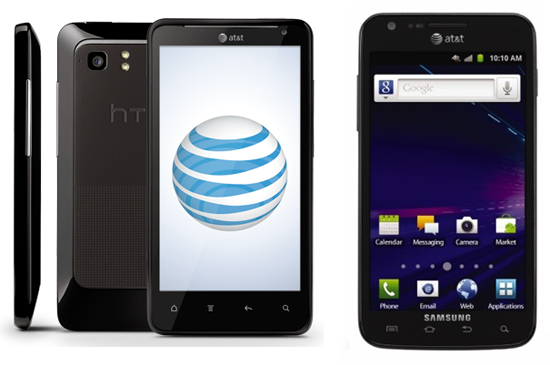 HTC EVO family legacy was continued by Sprint with the addition of HTC EVO Design 4G, the first EVO family member touting World Phone capabilities. But the phone faces immense pressure from the Samsung Galaxy S2 Skyrocket, which is a Long Term Evolution (LTE) version of the Galaxy S2 and debuted in the AT&T network on Nov. 6.

HTC EVO Design 4G boasts many of the “must-have” features of its predecessors, including Sprint 4G and a large touchscreen display of 4 inches while sporting a slim, pocket-friendly aluminum unibody design at an easily affordable price.

EVO Design 4G, which runs on the Android 2.3 Gingerbread OS and sports HTC Sense UI, is powered by a 1.2GHz single-core Qualcomm Snapdragon S2 MSM7630 processor with 768MB RAM. It also has a 5 megapixel LED flash camera with 720p HD video capture and a 1.3-megapixel camera for video chat. The phone has a 4GB ROM and an 8GB microSD card that is included in the package, which can be expanded up to 32GB.

Display: Skyrocket touts a 4.5-inch Super AMOLED Plus Gorilla Glass display with a resolution of 800 x 480 pixels and about 207 PPI pixel density. On the other hand, EVO Design 4G sports a 4-inch LCD capacitive touch-screen with 960 x 540 pixels qHD resolution and about 275 PPI pixels density.

Storage: EVO Design 4G has a 4GB ROM and an additional 8GB microSD card included in the package, which can be expanded up to 32GB. On the other hand, Skyrocket boasts of 16GB internal storage and via a microSD card slot it can expand up to 32 GB.